Once thought of as a futuristic, next-generation technique, laser engraving is now a widespread, common service that allows for highly intricate, personalized goods. Similar in concept to traditional wood burning, the hot, hand-controlled wood burning iron is replaced by a sophisticated, composite system that combines a highly-focused laser and an accompanying controller unit (powered by a computer system) which draws patterns on a surface with incredible accuracy. The result is a highly personalized, professional rendering of text or an image.

Because laser engraving uses digitized facsimilies of images, the controller and laser unit is able to make extremely fine gestures, adding a higher level of detail compared to hand engraving. In addition, because a laser allows for varying degrees of heat intensity, a wider range of surfaces can be engraved by vaporizing or burning the surface.

Early experiments with laser engraving mainly involved the use of light woods, since rudimentary lasers only were able to produce beams in excess of 10 watts. However, constantly improving technology in both laser intensity and controller accuracy now allows for laser engraving on a wide range of different surfaces. Some of the most popular surfaces are outlined below: 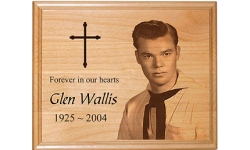 Thanks to lasers with variable heat intensities, hardwoods like walnut, mahogany and maple produce impressive results for laser engraved products and goods. This is due to the fact that hardwoods are highly dense, which means that the laser vaporizes surface in a more steady, constant manner. Softwoods can also bear impressive results, but the laser vaporization process tends to be more random and variable, which means that a reliable fan and vacuum system is critical for keeping the quality level high.

In addition, leather can also be laser engraved as well, and often produces an effect akin to that of traditional, rustic hot-branding styles. 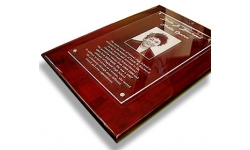 One of the true advantages of laser engraving is that the process opened up computer-controlled engraving and etching on synthetic plastics. Due to the fact that the laser can focus at different heat levels, standard cast acrylic plastic, acrylic plastic sheets, and other cast resins produce impressive results. There are even new plastic formulations that are specially designed to work well with laser engraving, such a plastics that incorporate silicate or other materials, which conduct extra heat away from the surface of the material before it can deform.

Not all plastics are engravable, however, and some plastics, such as Kevlar, are engravable, but put off toxic cyanide gas when engraved. It is best to work with the plastics offered by laser engraving specialists like Laser Engraved Memories rather than using store-bought plastic products. 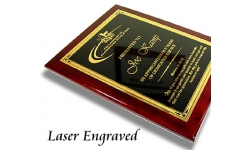 Early on in laser engraving technology, metals produced the poorest results, and service providers opted to use hand-controlled etching methods. However, advancing technology now produces impressive laser engraving results, thanks to the use of properly calibrated lasers and coated metal surfaces.

These coated metal surfaces feature a clear acrylic coating that is actually designed to be burned off. The coating, however, helps to control the vaporization process, allowing for a fine, intricate laser rendering. 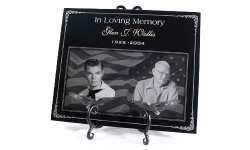 Laser Engraving On Stone and Glass

Similar to hardwoods, the high density of stone and marble make it an ideal surface for laser engraving. However, unlike wood, stone laser etching actually produces a series of micro-fractures along the engraving line, since micro-particles heat up alongside unheated portions of the stone, causing a micro-fracture. This gives a slightly different look to laser-made renderings.

Because of this, it is advisable to avoid large swaths of frosted, etched areas on glass, as the effect is often uneven.